Published by Gwynneth Anderson on September 15, 2009 | Leave a response

Any cemetery enthusiast will readily agree that highlighting just a few cemeteries out of so many can be an almost impossible task. And while only six King County cemeteries could be chosen for the indepth Stones & Bones articles, several other fascinating places will be highlighted when symbols, inscriptions and unique stones are discussed. 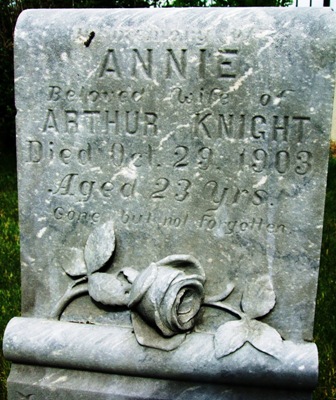 At one time, this area of King County was so heavily forested that tree stumps could be used as shelters or temporary housing. When logging was in full swing, the summer skies were overcast with a pall of smoke from the many forest fires and land clearings.(1) However, as the land was gradually cleared, news of the rich soil spread and farmers began moving into the area, soon outnumbering the original loggers.

In 1871, Ira Woodin and his wife Susan, settled down in this northern part of King County to pursue their logging and farming interests. In 1878 and in 1910, the Woodins deeded land from their homestead to the Woodinville Cemetery Association. Today, the cemetery quietly stands next to a busy road leading out to State Route 522, lovingly overseen by devoted volunteers. 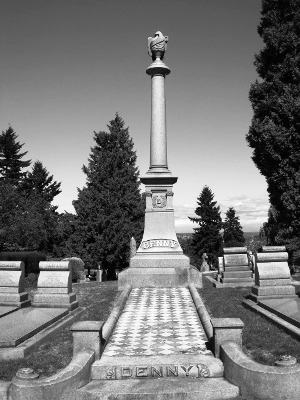 Home to almost virtually all the original Seattle pioneers, Lakeview Cemetery exudes a Victorian aura few would expect from a Pacific Northwest cemetery.

“Those who had passed on were thought of as sleeping in peace, awaiting final judgment in beautiful repose. The graves (after several unfortunate relocations) became a permanent shrine as late 19th century materialism propelled memorial architecture into ever grander statements of marble, granite and bronze.” (2)

Yet for all its classic Victorian monuments, Lakeview Cemetery has a rather unconventional past.

A number of its residents have been relocated several times as Seattle’s growth inexorably encroached upon cemetery boundaries. The term “graveyard shift” is credited to those grave diggers working late at night to exhume and transport coffins to another new cemetery location.

Local legend also has it that when it came time to relocate brothel owner Mother Damnable, graveyard shift workers found that her coffin weighed over 1,300 lbs. The reason? Her remains had apparently calcified into stone.

Crown Hill cemetery takes a little effort to find in northwest Seattle. Its low profile is so effective, many local residents don’t even realize a cemetery is in the middle of their quiet, snug neighborhood. And that’s how the old Scandinavians of Ballard would have liked it.

Walk through the older section and those spare, clean lines so often associated with IKEA, immediately become apparent.

“Ballard was a mill town in Seattle. It was made up of sawmills and ship chandleries and machine shops and fishing docks and dry docks. It was a place of working men, hardworking people, union men with big calloused hands, some of whom died young because they worked too hard. Ballard was not pretty…just a district of honest immigrant Swedes, Norwegians and Finns who sought to make their lives better, who sought dignity and decency without flair or fanfare.” (3) 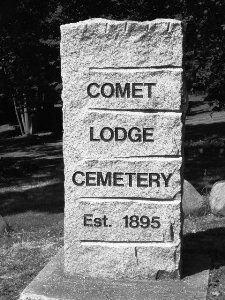 Remains of the day

One of the saddest stories in the Seattle area, Comet Lodge cemetery has acted as a Duwamish Indian burial site, Graham Street cemetery, I.O.O.F. cemetery and the Poorhouse cemetery, before finally arriving at its last designation.

Abandoned in the 1930s and eventually bulldozed in 1987 by someone claiming title to the land, the cemetery is thought to contain the ashes of Jacob and Samuel Maple, settlers arriving even before the illustrious Denny party in 1851. Only a few scattered stones remain on this otherwise vacant lot. 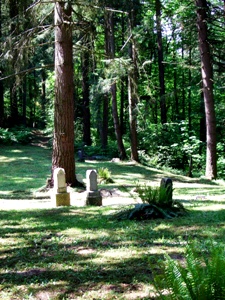 Stones in the woods

If there was ever a site representing a multi-ethnic America, Newcastle Coal Miners’ Cemetery would be it.

“The Newcastle cemetery east of Lake Boren dates back to 1879. By looking at the tombstones one can almost trace the various immigration waves: Scotsmen and Irish starting in the 1880s; Welsh, Swedes, Belgians and English in the 1900s; and last of all, the blacks. Other ethnic groups included Germans, Italians, Croatians, Serbians, Slavs and Finns.”(4)

Today, few of these stones remain but those that are left, offer some of the most beautifully and mysteriously carved inscriptions seen in this project. 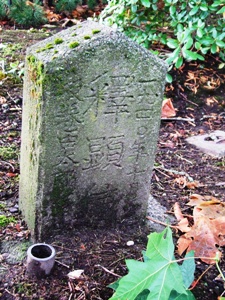 Traffic on a busy, 4-lane street rushes noisily by this little patch of zen, a reminder of the Japanese settlers who first settled in the White River valley in 1893, seeking to fill an agricultural void.

“Japanese farmers sold their produce at the Pike Place Market starting in 1912, five years after the market was founded. By the beginning of WWI, the occupied a staggering 70% of the market stalls. By the 1920s, the farmers supplied 75% of the region’s vegetables and half the milk.”(5)

Suffering a forced evacuation into the Colorado River and Minidoka internment camps during World War II, the Seattle Japanese population dropped from a high of 7,000 before World War II down to 5,800 in 1950. This cemetery holds the memories.

Coming up next: Part III – the stones give up their secrets