There is not a single foot of railroad track in Newcastle today, but the Railroads played a big part in the development of the coal fields and eventually the City. Parts of Coal Creek Parkway, the May Creek Trail, Coal Creek Park, SE 60th, and 112th SE are on top of original track beds. 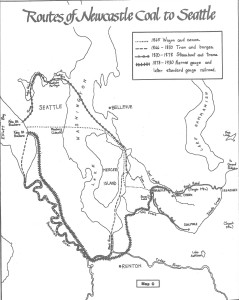 Transporting the coal from the mines to the port in Seattle was a daunting task when production began in 1863. At first the coal was moved via tramways, wagons, canoes, and barges to docks at King and Pike streets where it was loaded onto ships bound for San Francisco and, later, to Hawaii and Australia. Over the next 15 years improvements such as adding wooden tracks for the wagons, replacing the wood with steel rails, replacing barges with steamboats, and replacing mules with steam engines to pull the coal wagons took place.

It wasn’t until 1878 that a narrow gauge rail line from Seattle to Newcastle, was finished. The Seattle and Walla Walla Railroad completed a 6.5 route from Renton to the Newcastle mines. The extension into Newcastle required 18 trestles ranging from 3 feet to 120 feet in height and 40 feet to 1200 feet in length. With the completion of this route, the old portage route across Lake Washington was abandoned. The rail route crossed over the May Creek ravine south of the Windtree neighborhood, went east until current day Coal Creek Parkway just east of Lake Boren, and then east again along the north side of Coal Creek.

Steam engines and track also played a big part in mine operations. Smaller “tunnel engines” were brought in to move coal from the mines to the bunkers where it was washed, sorted, and made ready for shipment. Little Seattle, a tunnel engine, was 12 feet long and 4 and 1/2 feet high and could pull between 30 and 50 loaded coal cars each carrying 1 ton. During high production this engine would make 14 to 16 trips a day. Prior to the engines being used in the mines, coal was moved by horse and mule drawn wagons. Most of the animals lived their entire life below ground.

Moving coal from the mines to the port was certainly faster, but not necessarily safer. During the portage days a barge with loaded coal cars overturned in Lake Washington during rough weather. These loaded cars are still sitting upright on the bottom of the Lake with their cargo. In January 1880, 17 coal cars fell off the May Creek trestle and 1 man died. The engine and tender managed to stay on the track.

During the portage days, there was very little profit for the coal company due to the high cost of transport. The coal was loaded and unloaded as many as 11 times on its way to the port. That changed with the railroad coming in, but the profit picture was still with the transport. In 1879 the coal company made $63K on the sale of coal and the railroad made $122K on transporting the product.