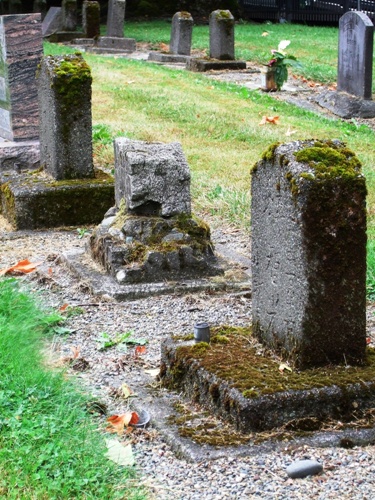 In the September 24th posting on Weathering, vandalism & maintenance, I wrote about some cleaning options that could be useful for most cemeteries, with the exception of Auburn Pioneer. In this particular site, the lichen and moss add a unique Buddhist zen aesthetic to the delicate cement markers. Rather than destroy both the marker and the writings, the caretakers would prefer finding someone to copy the old kanji inscriptions for translation before it disappears forever.

Kristy Lommen, one of the webmasters for the Auburn Pioneer cemetery website, is working with a Japanese translator on doing just that. She discusses the challenges and progress further in her guest post below.

The first recorded Japanese burial in the Auburn Pioneer Cemetery (that of Suketa Kumano) took place in 1903. In 1917, the rows in the eastern portion of the cemetery were set aside for the use of the Japanese community. Although there had been earlier Caucasian burials in this part of the cemetery, most of the surviving families later moved those remains to Auburn Mountain View Cemetery or other Kent-area cemeteries, in large part due to concerns about flooding at the Pioneer Cemetery (which was later remedied by the construction of dams and diversions on the Green and White Rivers).

The early Japanese burials were often marked with wooden stakes. In fall of 1928, the Rev. Giryo Takemura of the Buddhist Church, with the assistance of his father-in-law Chiyokichi Natsuhara, created concrete markers to replace the early, perishable wooden markers. Most of these concrete markers—many in a deteriorated state—are still in place as the sole markers of their respective graves. Unfortunately, even those that remain legible (after many decades of weathering) are incomprehensible to non-Japanese speakers since they were inscribed with traditional Chinese characters (kanji).

Luckily, at some point Terada Family descendant Allan Terada created a “key” to the Japanese burials in the Auburn Cemetery. A transcript of some of the kanji on each of the stones was recorded along with the corresponding family name in romaji (English). However, it appeared that several of the individual kanji transcripts could reveal more than just the family name if fully translated. Unfortunately, any additional information—beyond the family name—was not translated on the “Key” created by Mr. Terada.

In September of 2009, Ms. Yoshiko Kato of Osaka, Japan was invited to visit the cemetery. Ms. Kato (who is not related to the Kato family interred in the cemetery) was able to confirm that most of these early markers include three columns of kanji characters.

The left column lists the family and given name of the grave’s occupant. The central column indentifies the posthumous Buddhist name (or “Kaimyo”) given to the deceased that the time of death by his or her priest. The column on the right records the date of death. 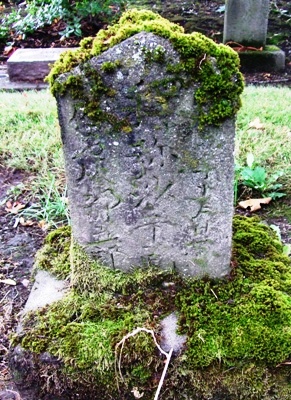 Ms. Kato has generously agreed to translate as much of the kanji as is still legible on the stones. With her assistance, we should be able to add even greater detail to the final lists soon.

Descendants or other visitors who wish to locate a specific family’s stone among these older markers should be aware that many of the families owned more than one plot in the cemetery, and that these plots are often scattered throughout the Japanese section. (This alphabetized chart, which is based on the Terada transcript and additional research by Hilda Meryhew, lists most of the plots associated with given family names).

The easiest way to locate a specific marker is to locate the nearest romaji marker (those written in English) and count the number of markers from that stone to the one you seek. We plan on uploading detailed lists that help determine a given plot’s position relative to nearby romaji markers soon (possibly in November).

Our profound thanks to Mr. Allan Terada for his work in creating the original key connecting the family names to specific markers, to Hilda Meryhew for her additional research in recording the cemetery’s burial locations, and to Yoshiko Kato for her efforts to translate additional information from the kanji that appears on the markers. It is only through their efforts that we have been able to maintain this critically important element of the cemetery’s history.

Note: When visiting the cemetery, rows 1 – 4 run north to south. Row 1 is the closest to the iron fence between the eastern border of the cemetery and the gravel parking lot.