You are here: Home / Rich’s stories / The Anticline: Newcastle 50 Million Years in the Making

The Anticline: Newcastle 50 Million Years in the Making

Fifty million years ago during the Eocene Period Western Washington was mostly covered by the sea and current day Puget Sound was a swampy estuary. Decaying magnolias, figs, palms, and tree ferns filled the low lying areas with organic matter. This material would be covered by sediment, some from volcanic eruptions, and over time seams of coal were created. The volcanic activity affected the shape of the coal beds and the quality of the coal itself. Higher concentrations of carbon from an eruption led to the creation of a better quality of coal. The Newcastle mines produced mostly bituminous which is a middle grade. 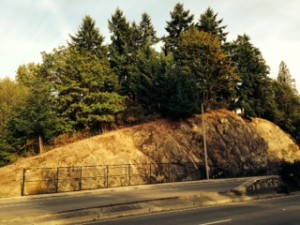 Millions of years of geologic activity pushed the coal seams hundreds of feet below the surface. How did the surveyors find the coal in a creek in 1853? Probably 20 million years ago a condition called an “anticline” took place. An anticline is a geologic fold in a strata of the Earth’s crust that is convex up(creating a dome for example) that pushes towards the surface. This anticline brought the coal seams close to the surface at a 35 to 40 degree angle going north towards Bellevue. Evidence of this movement can be seen in the rock wall on the east side of Coal Creek Parkway.

Gradually the area changed. The sea receded, and large forests took over the land. Evidence of these forests came in the form of large petrified tree trunks appearing throughout mine excavations, sometimes at the floor or the roofs of the coal seams. Eventually streams and creeks cut ravines into the surface and exposed the coal veins. The surveyors who originally found coal in this area had to travel along the streams because it was the only way to navigate around the thick forests of fir and cedar..

The undulating strata of compressed organic material, deposited during the Eocene period, 50 million years ago, formed the many veins tapped in this small community from 1863 until 1963. The geomorphology of these organic sediments largely determined the orientation of roads, housing, and industrial structures, and influenced the community’s economy. To the west, in the area that would become farms, the soil was rich with silt and loam.

Why was there no coal mining west of Coal Creek Parkway? The miners had tunneled west from Old Newcastle for about 200 feet when the coal seam abruptly ended. A couple of exploratory shafts were dug near Del Mar Woods with poor results. All activity then went east to, and under, Cougar Mountain. Later exploration showed that the continuation of the Newcastle coal seams was in Bellingham. Earthquake activity had moved the coal 135 miles to the north and brought the silt and loam from Oregon.