You are here: Home / Rich’s stories / Strikes and Uniontown 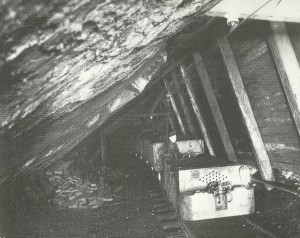 Early Newcastle was a coal town. That meant that everything (land and buildings) was owned by the Coal Company and the only jobs were associated with mining, separating, washing, and delivering the black diamonds. Conditions were hard and dangerous. “There was a man killed in the mine last night. Mr. Oakley (a Director) sent the coal car, with others in it, whizzing down into the mine. He fell out and it ran over him.” As a result of these conditions, Unions arrived and strikes became fairly frequent.

The Knights of Labor representing 50 of the 250 workers was on the scene. They operated from 1881 until 1891 and were noted for being anti black and anti Chinese. There were some short strikes during the first 5 years, but in 1886 a major protest began over the moving of an employee to work the brest (better pay) who the Knights felt was not entitled. The 200 non-members were OK with the move and the Company ignored the complaint. The Knights recruited 200 protesters from Issaquah and closed the mine and threatened to blow up buildings. The Company responded by bringing in an additional 24 “Deputies” from Portland. The ensuing skirmish (The Sheriff and Deputy were conveniently absent) left 1 dead and many wounded. The mine reopened after 3 weeks.

In 1891, another strike led to the Company bringing in 650 workers as strikebreakers at wages 15 to 20% less than the whites. This eventually caused the end of the Knights. Throughout most of the mining period, there was no such thing as paid retirement or Social Security. When a man could no longer handle a strenuous job he was assigned to the screen tables. Here were the one legged, one eyed, one lunged and elderly survivors. Sorting rock from coal was a miserable job.

Mine strikes occurred on and off for the next 20 years, but these were generally good times. The workers were now under the United Mine Workers. In 1919 a very serious protest took place. The Company had worked hard on cost controls in order to compete with coal from Montana and Wyoming. The miners had enough and went on strike. In response, the workers were forced out of their Company owned homes and miners from Montana were brought in. The lease agreements allowed the Company to reclaim the rented houses if there was a work stoppage.

The displaced miners set up camp at “Uniontown”. This was County property near the present day corner of Coal Creek Parkway and SE 89th. The strike lasted the better part of two years and the miners built some homes (two of which still exist with major modifications), a few stores, and many found jobs in Renton. The strike ended in 1922 and many of the workers returned to the coal mines. The Company did not want another strike, resolved complaints, and established a much improved atmosphere with worker involvement on major decisions.

This collegial atmosphere lasted until 1927 when the Pacific Coal Company decided to close the mines and began the process of tearing down the buildings and removing all the railroad track. Most of the miners not involved in the teardown found work in the other mining towns such as Issaquah, Black Diamond, Roslyn, etc.