Narrow gauge rail service was completed between Renton and the Newcastle coal mines in 1878. This 6.5 mile extension allowed for much greater production and therefore growth of the Company town. Regular passenger service began in November of 1878 enabling Newcastle to become more than just a mining town. It was a destination for hunting and hiking and allowed for the visit of President Rutherford B. Hayes in 1880.

Train service was not without its problems. In January of 1880 4.5 feet of snow fell in Seattle disrupting service, and in July of that month the train was 3 hours late. It seems the train had run off the track because it hit a hog. The train did not suffer damage, but the hog was cut in two. In 1883, Renton had 300 residents while Newcastle had 750.

When the rail line was originally built, mine waste was used to level the ground for the track and support the many trestles or low bridges required. There was enough coal in the tailings that spontaneous combustion would take place and burn the coal. As the coal burned the railroad bed would start to compress causing fluctuations in the rails. To keep the rail flat, there were two or three section crews who had the job of continually repairing the tracks. Enough coal could burn off in a week that a portion of rail could drop a foot.

In 1897 the rail was converted to standard gauge (wider) and the shorter bridges were removed and the canyons filled in with tailings to level the bed. This interrupted the natural water flow from the south into Coal Creek causing the creation of temporary wetlands and subsurface creeks that would cause washouts during rain events. 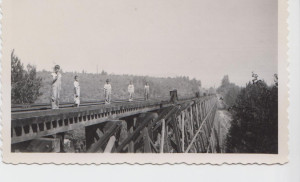 The biggest task in the conversion to standard gauge rail was the construction of a second large trestle over May Creek. Alongside of the existing 1200 foot long 120 foot structure another , less curvier bridge was built. At the time it was the largest timber structure in the United States. After completion, the old one was removed and the timber reused in the mines.

For the next thirty years the railroad played its part in the mining history of Newcastle. Through changes in production, weather, strikes, the train continued to run, although not always on time. A passenger train was scheduled to take 1 hour and twenty minutes to go from Seattle to Newcastle with stops at Renton and Kennydale.

Demand for coal diminished and production slowed dramatically during the 1920’s and by 1925 passenger rail service had stopped. By 1930 all rail service between Renton and Newcastle ceased. By 1933 the Newcastle line was officially abandoned. Hoping that coal demand would pick up, Pacific Coast Coal waited until 1937 to pull up all the rails. And pick them up they did along with dismantling or selling off all the buildings.