Every cemetery has many stories to tell. Some are sad, some are heartwarming, and some help us remember how we have grown as a people. At the time of the first burial in 1878, it was unheard of for whites and blacks to be buried in the same cemetery. Chinese would also be excluded. The Newcastle Miner’s Cemetery has both ethnic groups, though there is a distinction. Their gravesites are separated from the others, located in the southwest corner of the cemetery. African American miners were brought to Newcastle as strike breakers in the 1890’s. The Chinese came as railroad workers also in the 1890’s and stayed on after the work was completed.

According to the 1900 mine inspectors report George Oglesby and Ulysses Kelly were killed at the Newcastle mine. Ulysses, and 8 year old boy, had come across an injured chicken and hidden it in an abandoned mine shaft. The shaft had been closed off, but he managed to pry off a door. He went back the next day to retrieve the fowl and was overcome by black damp gas in the shaft. Upon learning he was missing, a town alarm sounded and a search began. George, returning from work as a miner, responded and eventually entered the shaft and was also overcome by the gas. Both of them died. 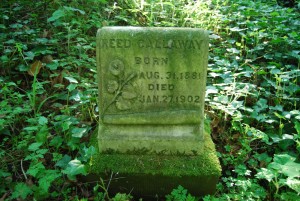 They are buried in that southwest corner, but there are no markers. Many of the graves were marked by an oval ring of stones, or a wooden marker, if a headstone could not be provided. The only way that we know about the black miners is that two headstones have survived in the part of the cemetery. Reed Callaway was born in 1881 and died in 1902, and Caleb Lock was born in North Carolina, the son of John Lock, and died in 1902 at the age of 16. 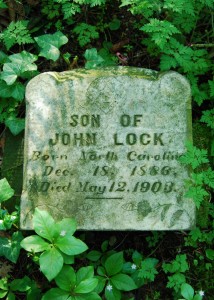 We believe there may be Chinese buried in that part of the cemetery, but to date we have not found any markers.

Susan Dast was buried in the cemetery in 1901. Her real name was Susanna Elisabet Tastula and she had followed her husband to America in 1899. The name change probably occurred as she passed through Ellis Island in New York. Born in 1864 she had one daughter who married a Swedish coal miner and they had two children while living in Newcastle. They went back to Sweden in 1907. The epithet on Susan’s headstone reads “Dying is but going home.”

We know a little about Susan because her great, great, grandson contacted the Historical Society for information on his long lost relative.

Thomas Donald, twice Justice of the Peace for Newcastle, was an influential member of the community. His house was on the east side of Lake Boren and he wanted a gravesite that would allow him to keep an eye on his property. His plot is at the very highest point of the cemetery on the west side.