What do we do when the temperature is 90 degrees? Sit in an air conditioned house, go to an air conditioned movie theater, take a drive in an air conditioned car, or maybe go to Coulon Park and enjoy the water. In 1890, the kids of Newcastle went to Etta Cartney Lake while their parents went to work or did their chores under the hot sun. The swimming hole was along the northeast shore near a steep embankment. A large tree supported a rope swing that would drop the kids 20 feet out . There was also a submerged tree out farther that the kids would swim to and stand on its end with their heads above water.

Etta Cartney was a young woman living in the area, and for a reason unknown to this author, had the local coal range named after her along with what is now called Lake Boren (It had also been called Little Lake). The lake was the recreation center for the residents and along with the local swimming hole was a great spot to fish. In 1883, the lake was 90 feet deep. Today the deepest part measures only 34 feet. Over the years great amounts of run-off have come down China Creek and filled in the lake.

There were flood plains to the North, South, and East and during the winter months these areas became swampy. In fact, when the first railroad was routed down what is now Coal Creek Parkway, a trestle was constructed over the marshy area. When the standard gauge came in to replace the narrow gauge the swamp was filled in and the trestle removed. The trains would pass by the lake about 15 feet above the surface of the water. In the winter the lake would freeze and daring young drivers would take their cars out on the ice. One unlucky young man ventured out before the ice was thick enough. He went through the ice. He was not hurt and the car recovered. 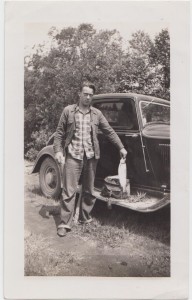 The lake was part of the migration route for a salmon run that would come through Lake Washington, follow May Creek, and continue up Boren Creek (formerly called Scottish Creek), and into Lake Boren. The salmon would then continue up China Creek to spawn. Milt Swanson recalled seeing many salmon in China Creek as he passed by in the bus on the way to high school in Issaquah (1932-1936). The run was stopped in the early 1950’s when a culvert was placed under what is now 84th st. There were more than salmon in the lake. In 1940 a 3# trout was taken.

After the salmon run was lost, the Department of Fisheries began stocking the lake with trout every year. Opening Day saw wall to wall boats across the lake in pursuit. The boat ramp on the east side of the lake was lost when Coal Creek Parkway was expanded.

As mentioned earlier, the north and south ends of the lake were swampy in the winter, but in the summer livestock grazed to the north on the fertile ground of the Peterson Farm, and to the south the Holts and Anks grew crops such as potatoes. The first houses on the lake were built in the 1940’s on the west side.